At The Bitter End

Tagline – The final days of war tests the final strands of friendship.

Logline – Poland, January 1945, in the harsh winter two resentful friends are in a fight for survival with thousands of Allied POWs being force marched hundreds of miles by their retreating Nazi captors. Based on true events.

Synopsis – January 1945. The Allies have the Nazis on the run. In the east, the Red Army relentlessly advances towards Berlin. In its path, thousands of allied inmates of the POW camps in Nazi occupied Poland. In the snow-covered courtyard of the camp, Allied POWs from all corners of the international alliance — including resentful friends William Catchpole and Jake Fulton — stand shivering and flinch at the Russian guns pounding the horizon. Their Nazi captors frantically empty the camp, following orders from Himmler — march all prisoners hundreds of miles West, to Germany. The camp gates open. The death march begins.

Catchpole and Fulton agree on only one thing — it’s Catchpole’s fault they are POWs. Tormented by his conscience, the once confident leader is now a nervous wreck. Catchpole avoids all conflict, so that he can deliver Fulton home as promised. Hot-headed Fulton however fights his captors at every turn, dangerously resigned to the belief that his destiny is dictated by anyone but him. As the march progresses, a series of reverse-chronological flashbacks document Catchpole and Fulton’s relationship from bitter POW duo, back to fresh-faced civilian pals in Essex — showcasing the hardship of camp life, their chaotic maiden Lancaster mission end in capture, a farewell to loved ones, and finally the motivation behind their doomed enlisting.

Their Nazi captors range from experienced, war-weary senior officer Commandant Reubern, through to young Hitler Youth graduate and model Nazi — Guard Joseph Mentsch. As supplies and orders dry up, the two factions of the Fürher’s dwindling army clash. Reubern knows he’s on a losing side and so dedicates his command to survival. Mentsch is bewildered by his superiors’ lack of faith in the Fürher, but his convictions are increasingly tested by harsh truths.

The Nazi’s push the POWs to their limits through freezing conditions and starvation. Russian planes catch up to the march in Czechoslovakia with ‘friendly fire’ killing scores of POWs and guards. In the chaos, Fulton escapes with fellow insubordinate POW, Australian Rogers. Catatonic, Catchpole believes Fulton and Rogers are dead.

The march reaches Germany, arriving at a devastated Dresden. The POWs are surrounded by soldiers in what looks like a bloody retaliation, but it’s revealed to be a safeguarding escort through Dresden’s rubble and its hostile civilians. Dresden’s civilians however pity the POWs — they share food and pray for an end to war. Their peaceful gesture sickens Mentsch.

Fulton and Rogers continue to flee, but their progress is slow as Rogers becomes ill. They inadvertently seek refuge in a brothel. Their hospitable stay is cut short when frequenting German soldiers discover Fulton and Rogers are allied POWs. Two gun shots in the night mark the end of Fulton and Rogers’ escape bid.

Reubern orders the march to refuge in a factory, where they encounter Commandant Richter, a defeated Nazi officer lumbered with POWs of his own. Reubern and Richter share bleak news and to Mentsch’s disgust, Richter has no impetuous to march further. The two march’s POWs are merged, with ‘new POWs’ Hunter and his crew enquiring after Australian Rogers — disappointed to hear him believed dead.

POW leader, British Captain Stortford becomes ill, demanding that ranking officer Catchpole reluctantly take command. A Nazi truck arrives at the factory, its frantic driver in a rush to dump his cargo and make for Berlin. That cargo is revealed to be Fulton and Rogers. Catchpole and Fulton reconcile. Opportunistic Richter joins the truck driver to make for Berlin, abandoning his march to a furious Reubern. Hunter and his crew confront Rogers, seeking revenge for a previous selfish escape bid by Rogers that had cost the lives of their comrades. Catchpole, supported by Fulton, intervenes and orders the matter closed.

Maddened, Mentsch marches Catchpole outside, intent on murdering the POW. Reubern and Stortford rush outside to stop Mentsch, with a shoot out erupting. Mentsch mows down Stortford and his fellow guards. Reubern is forced to kill Mentsch. The act his final as a Nazi commandant — he and his guards discard their weapons and uniforms to leave for home.

Finally free, but trapped behind enemy lines, the POWs’ lives are now in Catchpole’s hands. With Jake’s support, Catchpole organises the POWs to share Nazi jackets for warmth and ration supplies — seeking to ride out the war at the factory. The plan looks to have condemned them when food runs out and artillery fire bombards them. An unmarked tank rolls up outside the factory. Catchpole discards his Nazi jacket before heading out to plead for help. Covering his friend, Fulton flanks the tank armed with a rifle. After a tense stand-off the tank’s occupants reveal themselves as Russian allies — promising aid and evacuation, sparking jubilation.

Fulton emerges from his flanked position, but in his rush to celebrate he forgets to remove his Nazi jacket — a Russian solider shoots him. Catchpole cradles Fulton in his arms as he begins to bleed out. A final flashback reveals that back in Essex the young friends held reserved occupations and that they only enlisted because Catchpole was sick of hearing about the war adventures of friends, rather than living out his own.

Post-war Essex. Catchpole uncomfortably returns to civilian life with his girlfriend. At home whilst unpacking groceries he hears Fulton’s voice remind him that he made a promise. It is revealed the voice belongs to the bandaged, surviving Fulton and the promise he refers to now is simply the demand of a fresh cream bun. 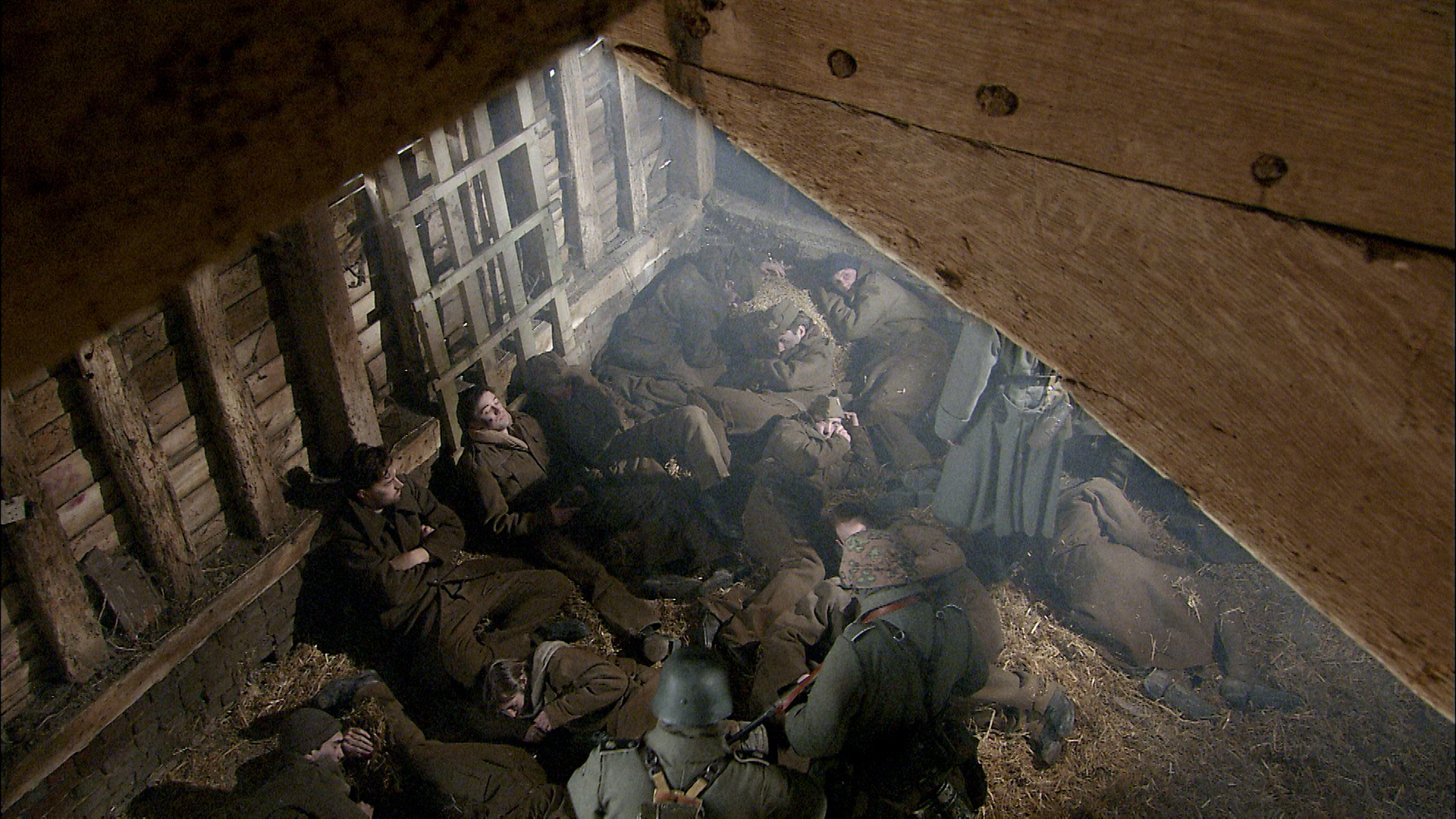 The Long March to Freedom

The Lancaster at War